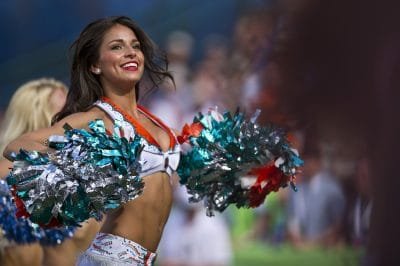 With their fluffy pompoms, big smiles and infectious energy, cheerleaders always look fabulous during their performances. However, few people know about the hard work and hours of rehearsals that go into perfecting each routine, often for little pay. Now, several former cheerleaders have decided to speak up about the unfair treatment they have endured at the hands of the National Football League (NFL).

Four cheerleaders from the San Francisco 49ers and San Francisco Raiders sued the NFL in U.S. District Court in San Francisco, demanding higher pay. They alleged the league and 26 of its teams conspired to pay their cheerleaders below market value and prevent them from asking for better salaries. The proposed class action lawsuit is seeking between $100 and $300 million in damages.

“The cheerleading life looks quite glamorous,” an ex-49ers cheerleader, also the lawsuit’s lead plaintiff, commented. “But I think once they see the number that’s actually attached to that, it’s not what you would think at all.” One former San Francisco Raiders cheerleader claimed she was not paid until the season ended. On top of that, her wages were slashed for various fines like missing a certain number of practices.

The cheerleaders allegedly only made about $100 per game and, in many cases, were not paid for mandatory public events or rehearsal time. In stark contrast, NFL players collectively earned $6.4 billion last year while NFL team mascots annually make between $25,000 and $60,000, often with benefits. The lawsuit also points out that the league tried to “prohibit female athletes from discussing their wages with each other in a further effort to suppress wages.”

In 2015, California Gov. Jerry Brown signed a law that recognizes professional cheerleaders as employees instead of contractors. The law entitles them to the same workplace protections and benefits as the state’s other hourly employees, such as sick leave, overtime pay and rest breaks. Unfortunately, cheerleaders will continue to suffer workplace injustices until their employers take such laws seriously.